Whilst very young, and thanks to the teacher “who she will never forget”, Maria Teresa realised that she loved to sing. In French or in Portuguese, since she is bilingual it mattered little, she loved to sing! As she says, “Singing is very important for people”.

After finishing her studies (Applied Languages), the question was raised as to her future. She had the answer herself: “to stop singing would be like stopping breathing”. She bravely sought work in bars and cabarets and at her second attempt, the “Brasilia” opened its doors and gave her the opportunity to discover the world of musicians and cabarets. She took up her studies again, and began a new life… One thing led to another, and Maria Teresa joined the “3 Maillets” where she sang every night. Her encounters there were momentous: Toninho Do Carmo, who would be a driving force in her career as guitarist, arranger, producer and artistic director; Rui Frati and Isabel Ribeiro, who worked together in theatre productions (in particular for the Théâtre de l’Opprimé); Francis Varis and Zé Luis Nascimento, respectively accordionist and percussionist on her five latest albums; Raul de Souza, trombonist (featured on the first CD); Georges Moustaki, who would offer her many slots as supporting artist and the chance to perform with him as a duo. 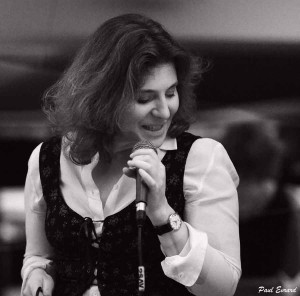 As a result, her career took off. Her first album “Porto Das Palabas” (M10, 1999), of compositions by Brazilian music lover Carlos Marques arranged by Toninho Do Carmo, was recorded with newly-met musicians and given the support of Georges Moustaki. Next, thanks to Guillaume Dubois (sound engineer) and Valérie Mauge (harmonia mundi), who were both Titi Robin’s managers during the 2000s, Maria Teresa was able to sign her second album “O Mar” (Le Chant du Monde, 2003) and work with Blue Line. A professional team that worked together for several years, releasing two more CDs: “Lusofonia” (Le Chant du Monde, 2005) and “Era Uma Vez Um Jardim” (Le Chant du Monde, 2009). Non-stop tours in France and abroad: Portugal, Switzerland, Spain, Canada, Brazil… Festivals: Bout du Monde, Fiesta Latina, Migractions festival… Together with Georges Moustaki, she sometimes toured or took part in prestigious concerts such as those at L’Olympia (in 2000 and 2003).

Between 2010 and 2014, Maria Teresa concentrated on her career as an actress at the Théâtre de l’Opprimé, but singing was always present as she also played several roles in musicals (including Beco das garrafas, Dans l’ombre…), pieces by Rui Frati and Isabel Ribeiro. It was Isabel Ribeiro who made it possible for Maria Teresa to release a fifth album “Woman” (Défis, 2014) with her newly-founded record label.

Maria Teresa has always expressed emotions with elegance, those of her Portuguese roots, those of Brazil, those of the Lusophone world in general, those of the country of her birth and of her childhood through the lyrics given us by the authors of French chanson. Singer of the songs of the people, Maria Teresa is gifted with a warm and clear voice, sweet and calm yet tinged with solemnity, able to penetrate to the bottom of your soul. Moustaki knew just how much the purity of her song reflects the purity of her heart.

Keeping her promise to “Jo”, Maria Teresa and Toninho Do Carmo (who accompanied Moustaki from 1996 to 2009) continue to sing his work! They have just recorded 21 compositions by George Moustaki, alongside three of his other faithful musicians.

The album is naturally called “Pour un ami” and will be released in October 2016 (CSB Productions / L’Autre Distribution).