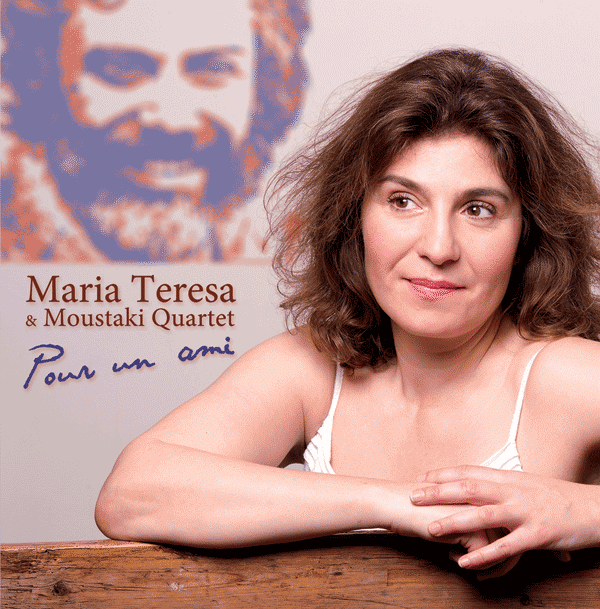 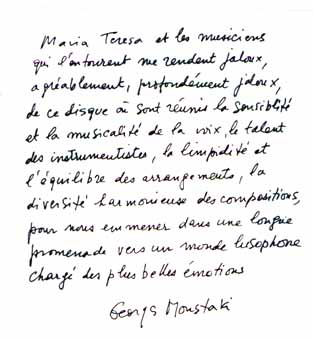 « Maria Teresa and the musicians accompanying her make me feel envious, agreeably and deeply envious of this album in which the sensitivity and musicality of her voice, the talent of the musicians, the clarity and balance of the arrangements and the harmonious diversity of the compositions take us on a long promenade towards a Lusophone world full of the most wonderful emotions. »

I am sure that today, Georges Moustaki would use these same words that he dedicated to one of Maria Teresa’s albums.

Moustaki and Teresa met in Paris. He would often invite her to join him on stage (including at L’Olympia) and to sing several songs as a duo, such as Le facteur, Portugal, L’inconsolable. The musicians accompanying Maria Teresa on this album – Toninho Do Carmo, Marc Bertaux, Francis Jauvain and Luiz-Augusto Cavani – all played with Moustaki who, during the twenty last years of his career around the world, was as much a friend as a fellow musician to them.

We know that Georges Moustaki was forced to stop singing in 2009. Since that time, his musicians have followed their individual artistic and recording careers, coming together for two concerts in homage to Moustaki who continued to bring them together even after his death in 2013.

And here they are together again in the recording studio, to accompany Maria Teresa and record this new album with her – Pour un ami – (the singer’s sixth album). Needless to say, the friend is Georges Moustaki.

Who better than these artists to play together with Maria Teresa this o so familiar repertory?

This album presents not only several of Georges Moustaki’s greatest songs, but also songs that he translated into French, so that we might discover them as part of the repertory of his Brazilian friends and brothers.

Thank you Teresa, Toninho, Marc, Francis and Luiz, for this gift: a scrupulous and precious piece of work around some of the wonderful songs given us by Georges Moustaki. Georges Moustaki, the singer, the song-maker who, needless to say, is always in our memory.

Moustaki knew just how elegantly Maria Teresa expresses the emotions of her Portuguese roots, of Brazil, of the Lusophone world in general and of the country of her birth and of her childhood through the lyrics given us by the authors of French chanson. Singer of the songs of the people, Maria Teresa is gifted with a warm and clear voice, sweet and calm yet tinged with solemnity, able to penetrate to the bottom of your soul. She moves us by her kindness, modesty, gentleness mixed with strength… Moustaki probed her soul and knew just how much the purity of her song reflects the purity of her heart. 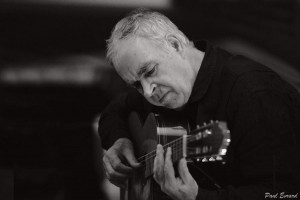 Generosity, authenticity, talent are amongst the words that come to mind when listening to Maria Teresa’s albums, and when one meets her. The same adjectives can be used to describe Toninho Do Carmo, with his remarkably subtle and delicate style of playing. Once again, Moustaki knew – it was not by chance that he chose Toninho to accompany him from 1996 to 2009. What a delight to work so closely with a musician who could accompany him both as an artist and as a human being, enfolding him in a warm, reassuring, unperturbed and loyal presence.

Maria Teresa and Toninho Do Carmo accompanied Moustaki for several years on vocals and guitar. At the end of his life, Moustaki said to them: “I hope you will continue to sing my songs”. They have kept their promise!
The “Moustaki” musicians – Marc Bertaux, Luiz Augusto Cavani, Francis Jauvin – were asked if they were ready to embark on this new journey. The reply was immediate and enthusiastic.

Guests
Vincent Segal, the cellist who needs no introduction, a neighbour of Ile St Louis, he had produced Moustaki’s album “Solitaire” (2008), and also agreed without hesitation to take part in this recording;

Patrick Bebey, a companion of Maria Teresa and Toninho, he naturally came forward to accompany these timeless melodies on the piano.

“My family is spread over many countries in the world” observed Georges Moustaki, while playfully attempting to make a list of those singing his songs in a dozen different languages.
Maria Teresa has been part of this family for a long time, from the wings to the stages where Moustaki often invited her to join him. Toninho Do Carmo, a discreet man and exceptional guitarist, travelled the world with Georges Moustaki for more than ten years, and is passionate about his work.
In this album he shares the helm with Maria Teresa in selecting the songs, and is responsible for the arrangements and recordings.

With the album Pour un ami, Maria Teresa naturally revives the musical world that was hers for so many years.
Other than a few of his hits occasionally played on the radio, Georges Moustaki’s work is now something of a “sleeping beauty”.

We have to thank Maria Teresa and Toninho for this musically shining collection in which the singer slips in a few verses both in Greek and in her parents’ tongue. Portugal, the adaptation of Fado tropical by Chico Buarque and Rui Guerra, in which Moustaki salutes the Carnation Revolution, has since become a classic there.
“You must not sing louder than your heart” declared Georges Moustaki, quoting Reynaldo Hann. Maria Teresa’s heart is loyal, and she gives these songs back their original glow, the freshness of the dawn. 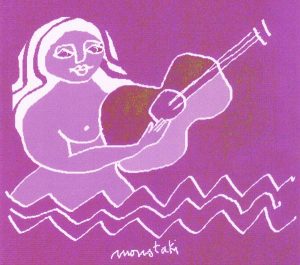 “Pour un ami”, the album’s title, the title of one of the songs, is therefore the continuation of a long and wonderful story, that of Moustaki, which he lived with his musicians and which continues to be charted by the voice of Maria Teresa.